In this document we will go over different types of motion that can be achieved by Dorna. We will explain the basic concepts that you need to understand before choosing the right motion type and parameters for your application.

Joint coordinate system is the representation of the robot position in the space using the values of its joints. We use degree as the unit of each joint value. Dorna has 5 independent joints and there are 3 auxiliary joints that can be controlled by the controller for extra motors. The joints are denoted by j0, j1, j2, j3, j4 for the robot coordinates and j5, j6, j7 for the auxiliary axes. Intuitively, each joint is measured as the angle from a link to the previous link of the robot. The robot when all joints are zero and the direction of the joints is shown in the following image. 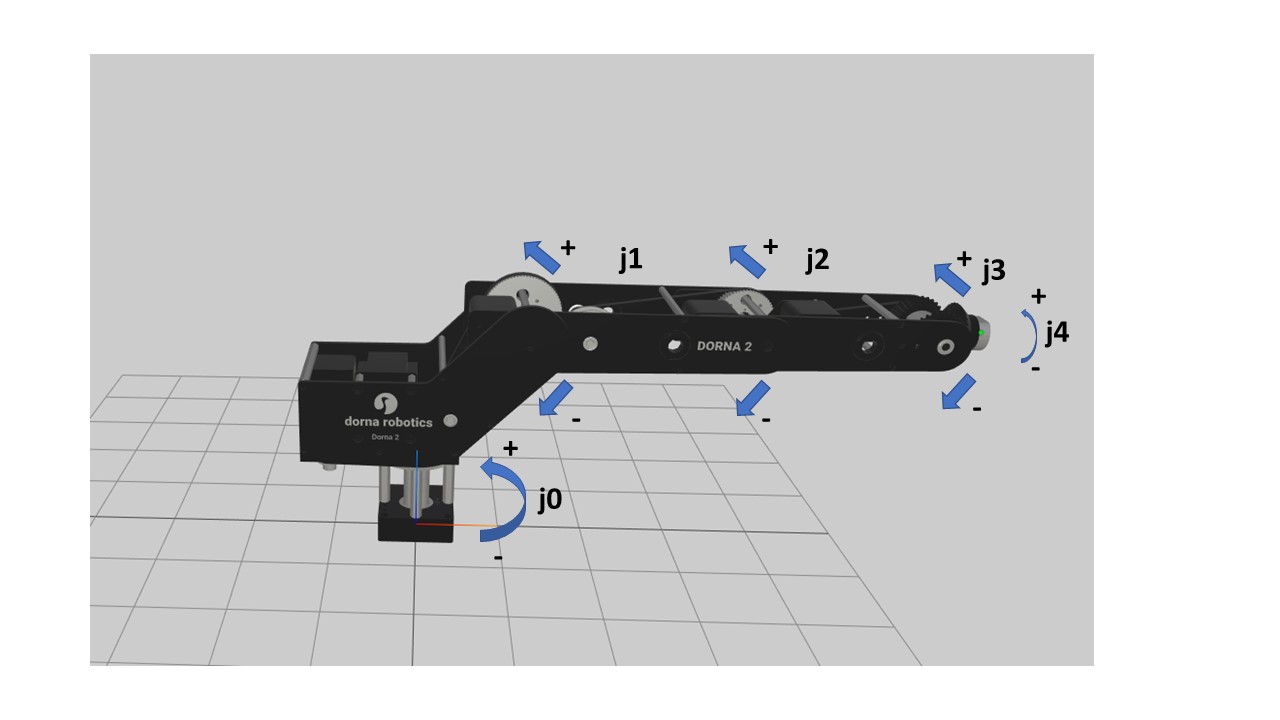 There is a physical limit for each joint of the robot as follows. 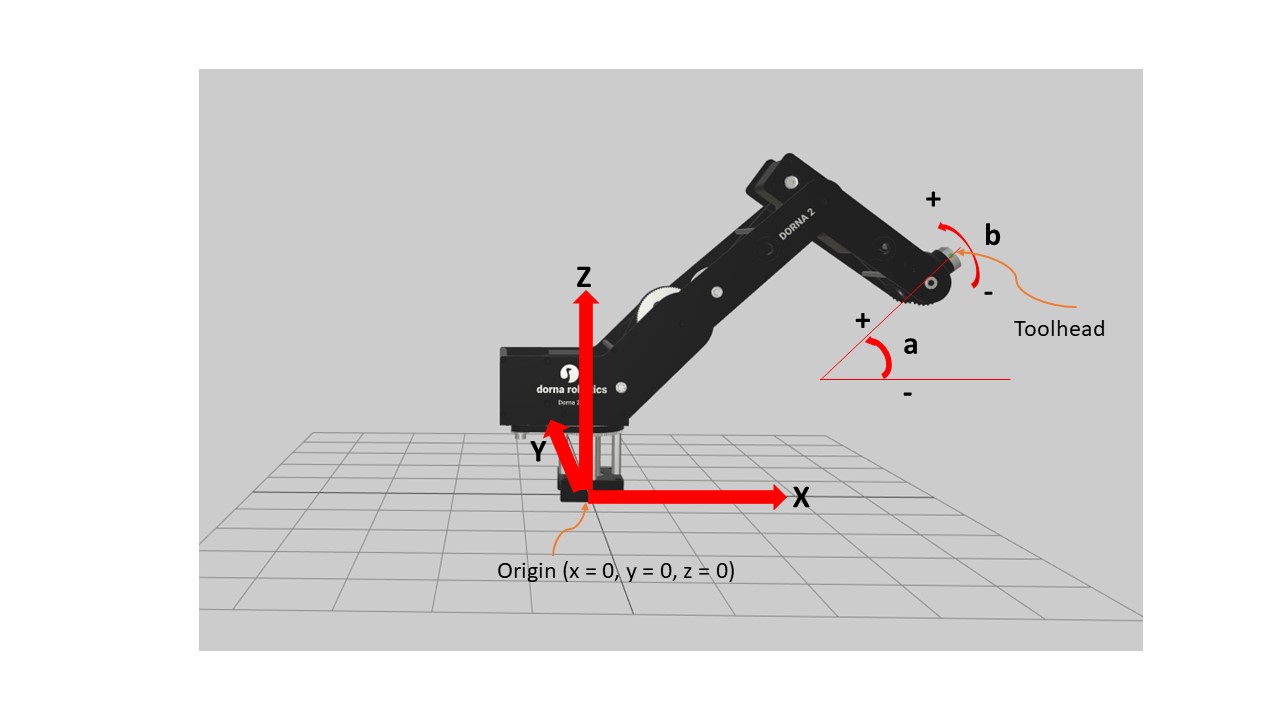 Dorna 2 has two general types of motions. They are line and circle. These two types can be either in joints space or in Cartesian space. Here we explain these two types in more details and the commands that generate these two motions.

jmove and rmove traverse the shortest distance (in terms of motors rotation), between two points. Therefore, they are better choice for high speed applications.

The difference between jmove and rmove is how the speed, acceleration and jerk parameters are interpreted in the command. You can specify these parameters as absolute values in jmove, while in rmove their values will be interpreted as the ratio between their absolute value and their maximum value in the specific motion. 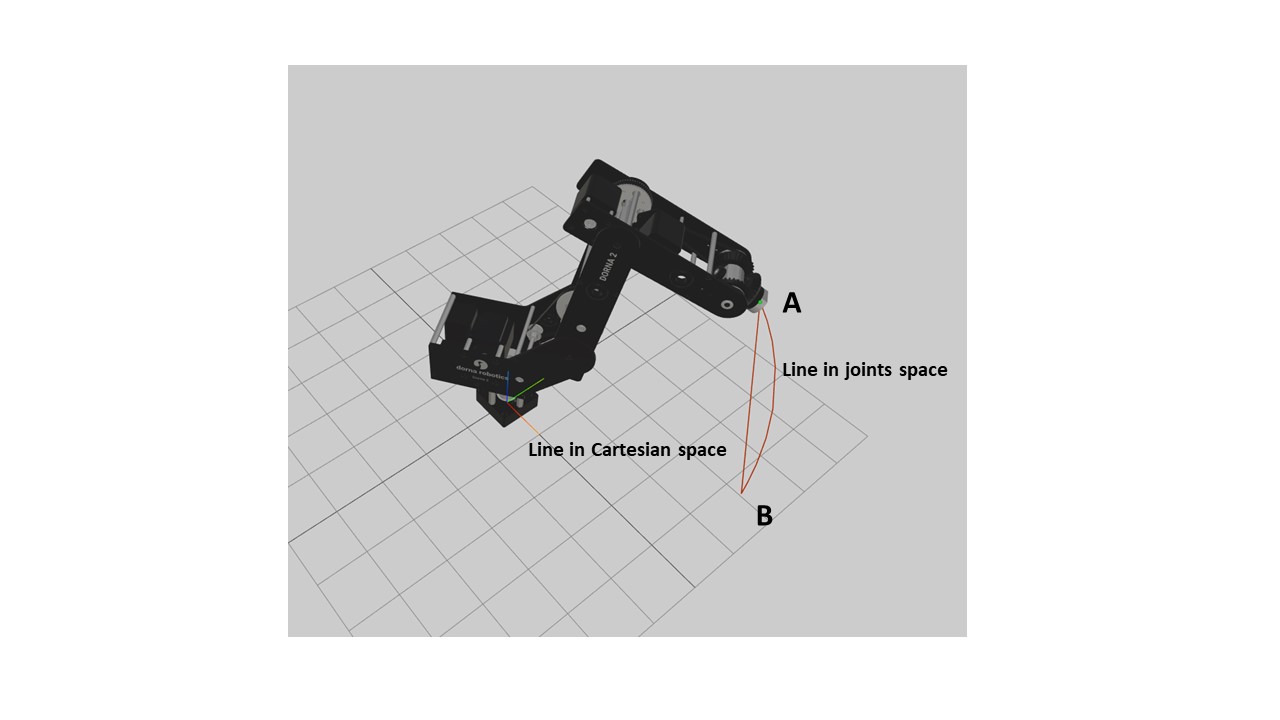 Circle is a set of points in space that are at the same distance from a center point and live on a plane. In Dorna 2, a circle is uniquely specified with three points:

Another parameter of the circle is turn, which specifies how many full turn the robot will make in addition to the initial partial circle that connects the initial point to the final point through the midpoint.

In addition to the initial point and final point of the circle, you will need to specify the space in which the circle lives in. You can choose between joints space and Cartesian space.

Circle has another parameter called dim which is the dimension of the circle. The dimension can be any number from 1 to 8. If the user sets the dimension to a number n, the circle will be formed using the first n coordinates of the space. Therefore, the first n coordinates of the robot will move on a circle, and all other coordinates will move along a line that is drawn between the initial point of the circle and final point of the circle. Using the dim, value, and turn values larger than 1, you can make the robot move along spiral path. For example, the following picture shows the trajectory of a circle in Cartesian space that is drawn in x,y coordinates (dim = 2) and with all other coordinates (z, a, b) moving on a line with turn = 3 for 3 full turns. 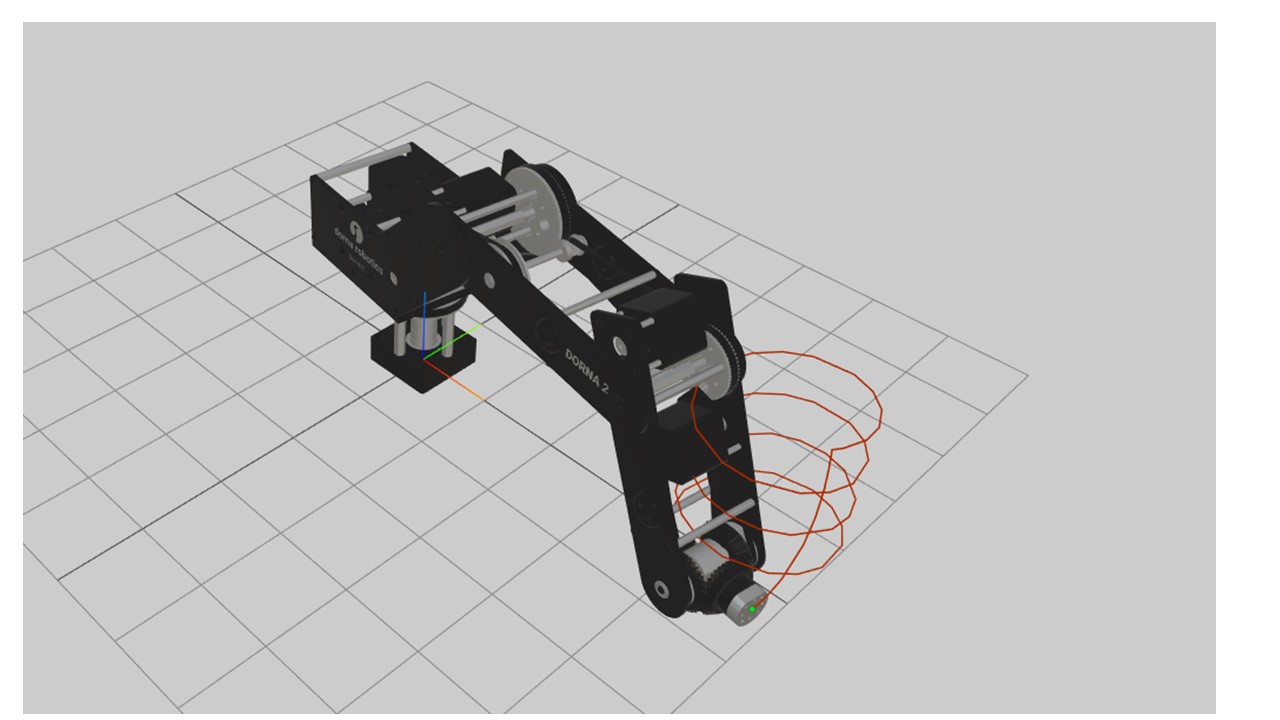 Dynamic of a motion

Each motion command has associated parameters that define the dynamic of the motion along its trajectory. These parameters are the following:

How to pick the right value

Ususally, by trial and error you will find the optimal value of velocity, acceleration and jerk in your motion command. The optimal values will result in a motion that is done in the shortest amount of the time and has a smooth start and end. Here we will provide few guidelines to pick the (near) optimal values for your application.

In many applications you will need to create complex trajectory shapes beyond line or circle. In some other applications, you might need to create continues transition from one motion to another motion without full stop at the end of each motion. Dorna 2 motion planner makes it possible by an advanced feature called continuous motion.

With continuous feature is on, the controller, will connect each new motion to the previous motion that it has in its queue. As soon as the controller run out of motion commands in its queue, it will stop at the end of the last command.

Since by physics laws, it is impossible to traverse two lines that are not colinear in space, without a full stop at the sharp corner, continuous motion feature, do two things to traverse connecting lines smoothly: 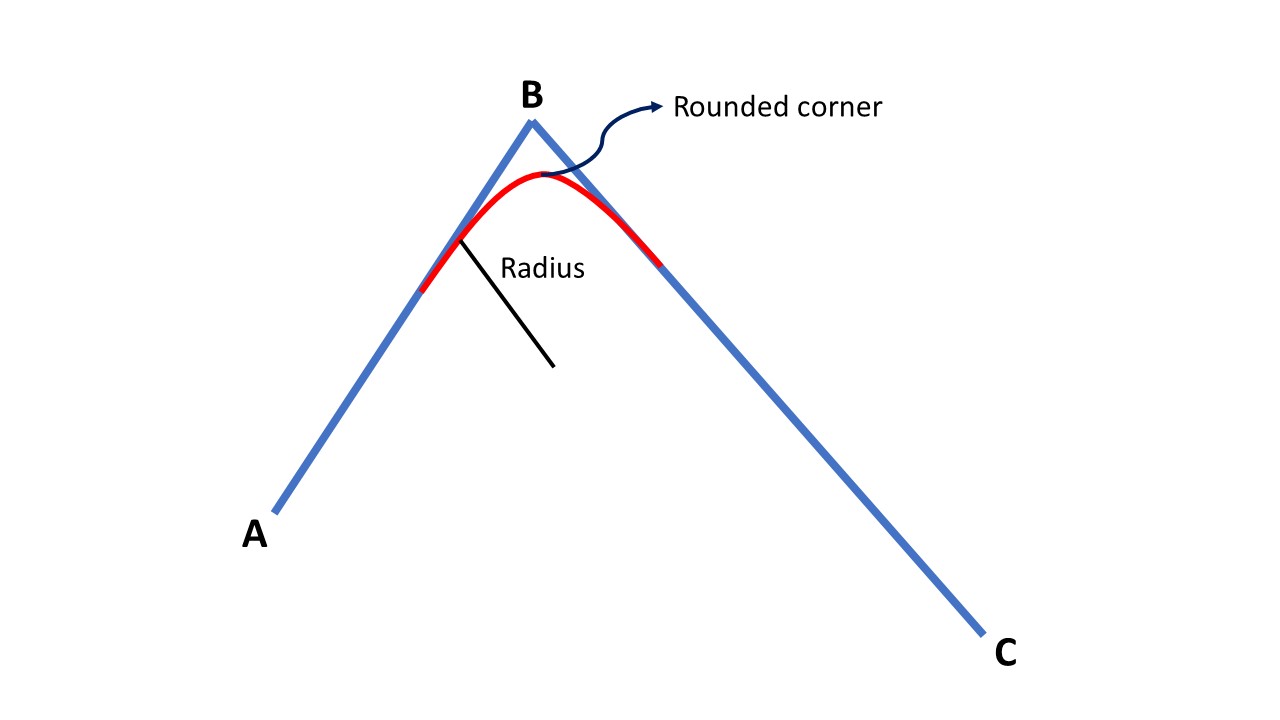 To make the corners traverse smoother, reduce the acceleration of the line or increase the radius of the corner. corner and accel parameters provide a tradeoff between how closely track the original trajectory vs. how much the speed is reduced at corners. Larger corner radius or smaller acceleration both will make smoother corner traverses. First one will preserve the speed, while the second will follow the original path closer.

The path planner engine in Dorna 2, can plan continuous transition between lines if at the time of planning the command for the first line, there is another command for the second line is in its queue. For realtime applications, where the commands are generated in realtime, it is recommended to use lmove commands for continuous motion applications as they need more time for processing in the controller queue and therefore they allow for more delay between the next command to arrive.

All move commands in Dorna 2 controller, can accept coordinates in both absolute and relative form. The relevant parameter in motion commands is rel. When rel is set to 1, all coordinates presented in the command (final point in line and final and mid points in circle) are relative to the initial point of the motion command. Whereas if the rel parameter is set to 0, all coordinates in the command are interpreted as absolute values.