In this document we will walk you through quick steps to set up the robot and start programming with it after unpacking.

The first thing you need to do is to mount the robot on a sturdy and stable surface. The robot can operate while installed on the ground or hanged from the ceiling. The base of the robot has four 8mm holes for M8 screws. You can also use 5/16” screws for securing the robot. For quick tests, you can also use woodworking clamps to secure the robot base on a desk. 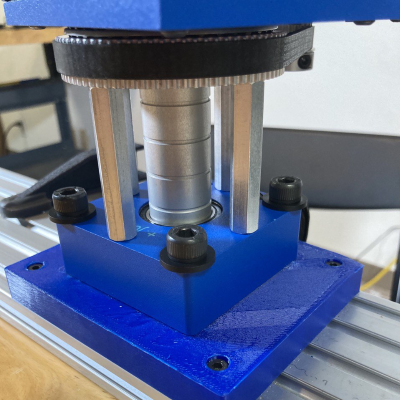 Unsecure or unstable mounting surfaces will degrade the quality of motion and the maximum capacity of the robot. 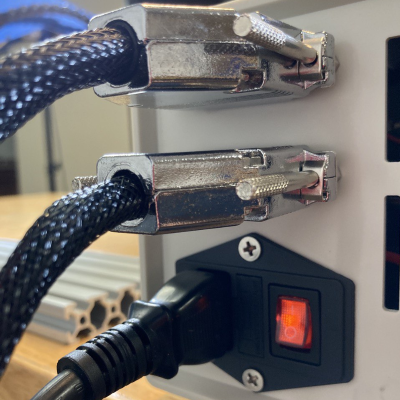 Next, launch the control software for Dorna robot, called Dorna lab on a web browser at this address: http://lab.dorna.ai/.

You can use a desktop computer, laptop, tablet, or cell phone, for launching the application. Note that, after the initial launch of Dorna lab, you don’t need an internet connection for operating the robot as the application runs completely on your local device. 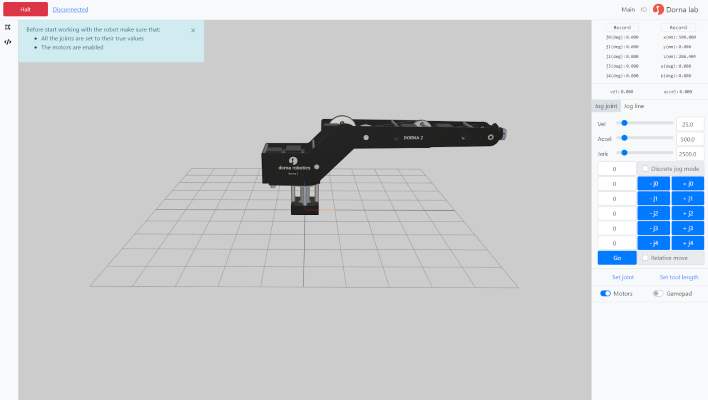 Next we will establish a connection to the robot. Dorna 2 is powered by a Raspberry Pi 4 computer. One of the tasks of the Raspberry Pi board is providing a communication link between the user and the controller through websocket protocol. The protocol can run either on a wireless network through Wifi, or on a wired network through an ethernet cable. In either case, you will need to know the IP address of the controller, to be able to connect to it. There are several ways for finding the IP address of a Raspberry Pi computer, which you can read about them on this page: https://www.raspberrypi.org/documentation/remote-access/ip-address.md

Wifi is enabled by default on the Dorna 2 controller. However, you will need to modify the wifi settings based on the SSID and password of your wifi router before being able to connect to your wireless router. You can set it up using command line as explained in this link: https://www.raspberrypi.org/documentation/configuration/wireless/wireless-cli.md 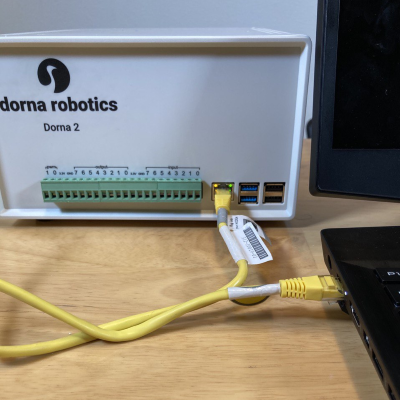 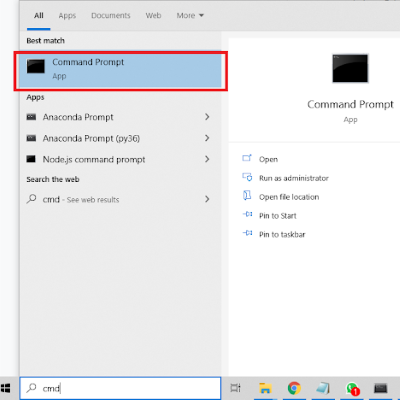 Then ssh to Dorna 2 controller using the following command:

After that you will be asked to enter the password, which is “dorna” by default.

Note that “dorna” (all small letters) is the default host name, username and password for Dorna 2 controller and should be recognized by your Windows computer. If it is not recognized, you will need to use a different method (as specified in the link in the beginning of this section) to find the IP address of the robot and use it instead of the hostname in the command above.

After establishing ssh connection, use command “ifconfig” in the terminal window to find the LAN IP address of Dorna 2 controller. 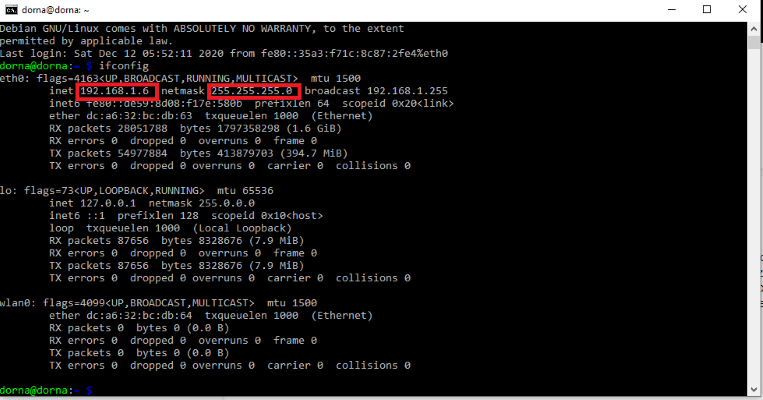 Two numbers are important in the output of ifconfig command. One is the controller Ethernet IP address which is in our specific case 192.168.1.6 and the next one is netmask number which in our case is 255.255.255.0.

Now, you have to change the Ethernet settings on on your Windows computer to be able to discover the controller IP address.

Open, control panel on Windows and click on “Network and Internet”. 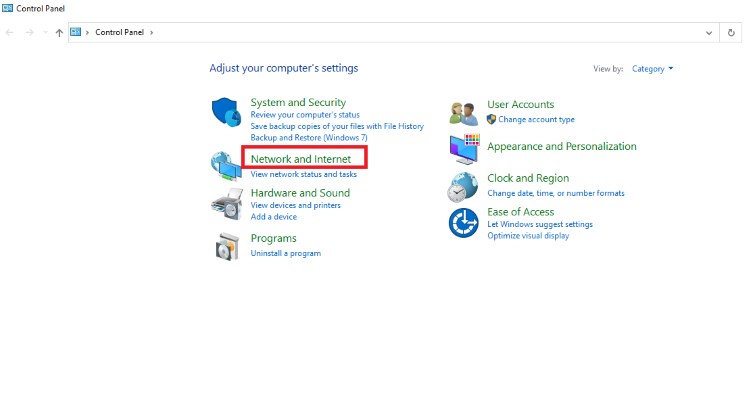 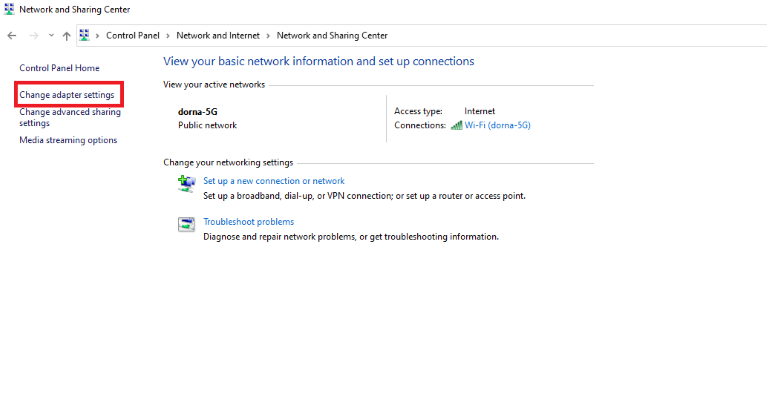 From the window that opens, choose “Ethernet”. 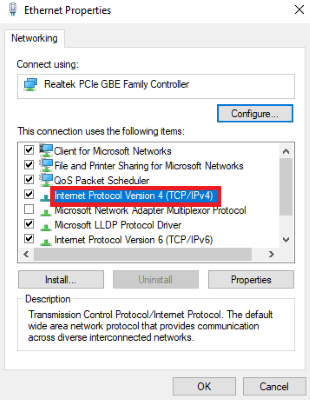 In the window that opens, choose “Choose the following IP address:” option and enter the IP address and Subnet mask from your controller ifconfig output, with one modification that the last number of the IP address should be different from the the controller IP address (within range of 0 to 255). Here we pick 192.168.1.7, but anything other than 6 will work for the last number. Next click on Ok to save the assigned IP address. 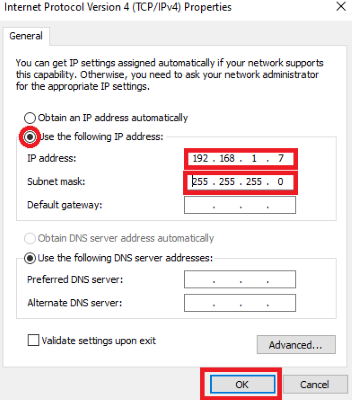 Now your Windows computer can recognize the controller IP address. To connect to the controller in Dorna lab click on connection status link on the top of the page. 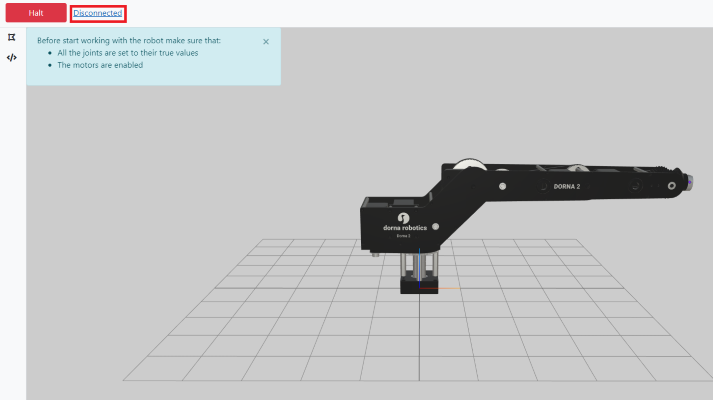 In the connection window that opens, place the hostname of your controller which is “dorna” or just use the IP address of the controller that you found in previous steps in the “Websocket URL Area” followed by the port number (which is 443) and click on “Connect”.

Now Dorna lab is connected to the controller and you can begin operating Dorna.

To set the joints to their correct values, first put the joints in a mechanically defined position. The position is called home position and is defined as follows.

We begin by placing the wrist (joints j3 and j4) in the home position. In this position, the flat surface on the wrist will touch the standoff on the previous link as the picture below. 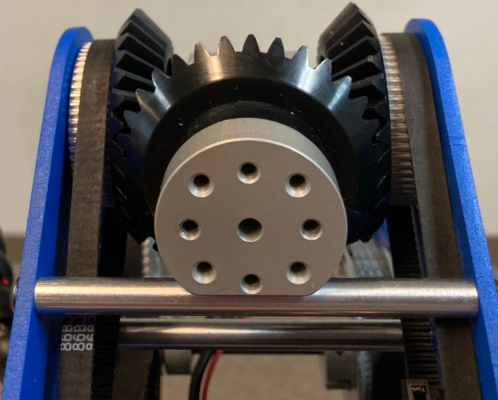 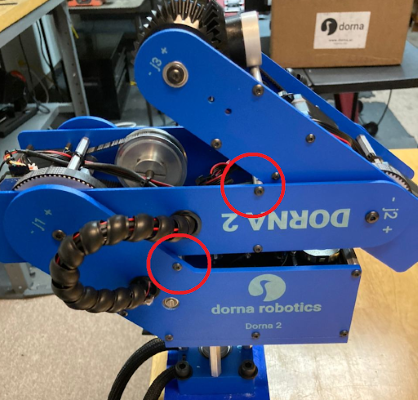 Finally, we will rotate the base joint (j0) towards its maximum value until it hits an internal mechanical limit stop. In this position, the cables are coming out at the same direction as the head of the robot. 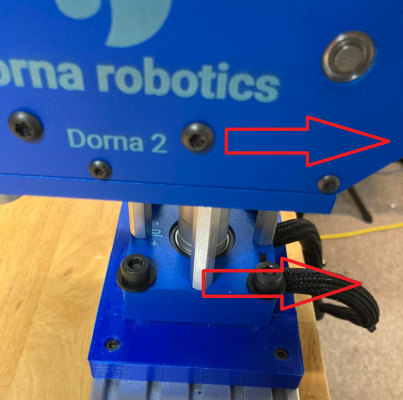 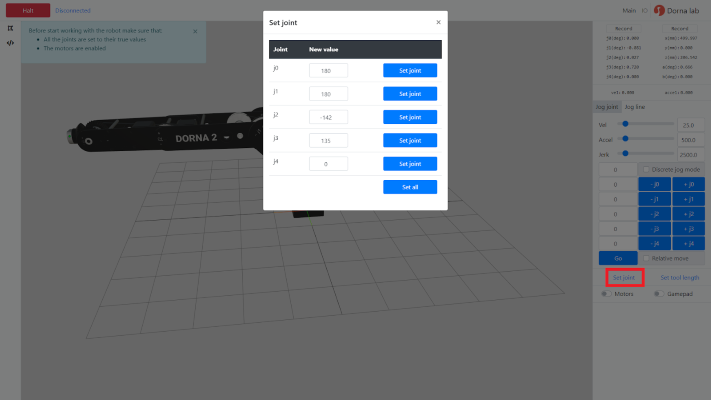 The default values given in this window for each joint is the value of the joints at their home positions. We can either set each joint individually or use “Set all” to set them altogether.

If you are using a different home position or another reference position for your robot, you can enter your custom joints values in the “Set joint” window and use that as a starting point.

After all joints have been set to their correct values, we can turn the motors on and start moving the robot. 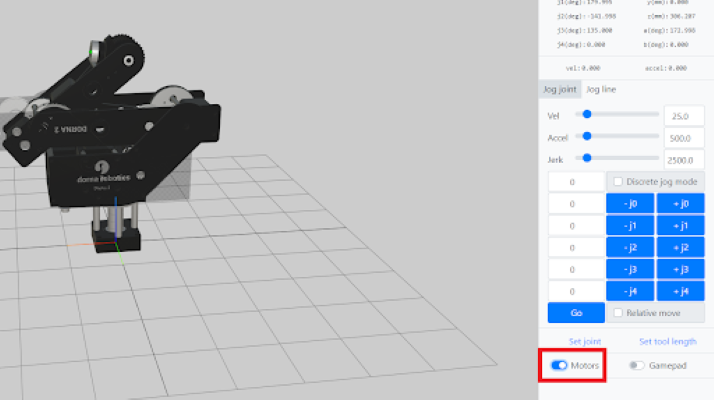 To move the robot, you will have few options in Dorna Lab. You can use the jog buttons on the right hand side of the screen, to move the robot joints or choose the jog line to directly move the robot head on straight line, towards your desired location. The velocity, acceleration and jerk values for a motion, can be changed using the sliders in this area. 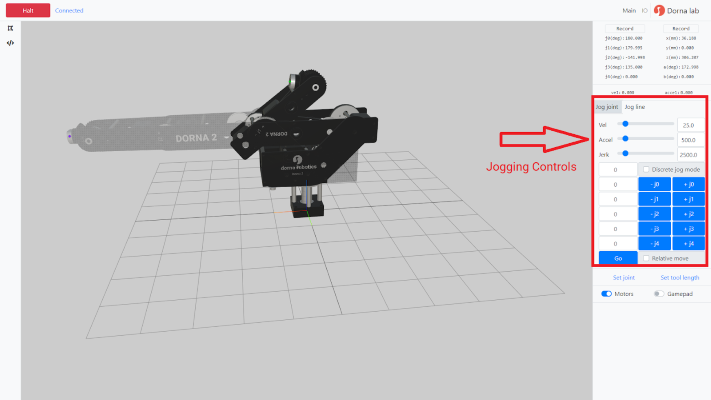 You can also write motion commands directly in the command window. Activate command window by pressing on its icon on the left hand side of the screen. 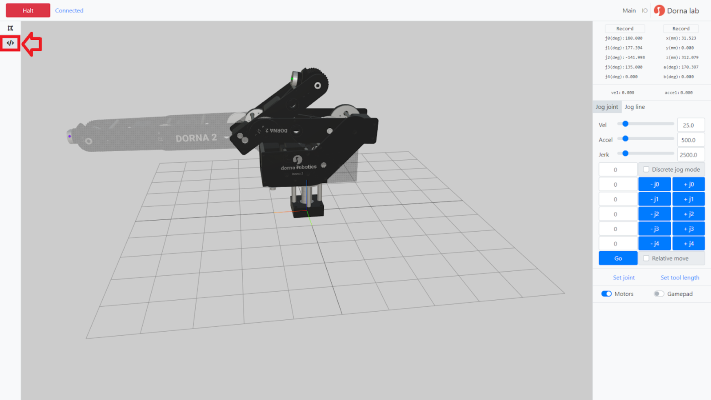 Then compose your set of commands and press the “Play” button to run the commands on the robot. 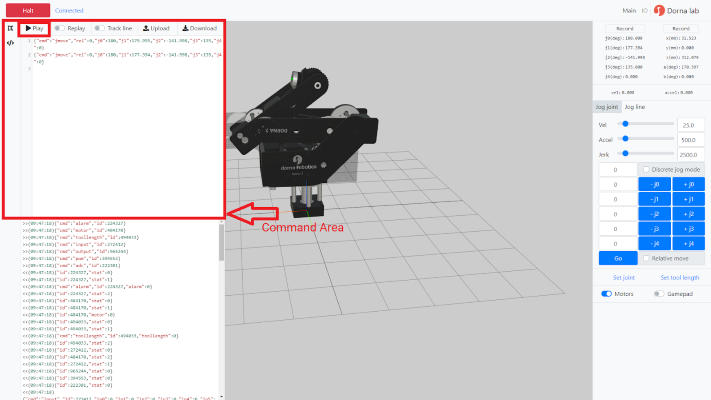 For a set of commands that you can use, please refer to the commands page on our documentation: https://doc.dorna.ai/docs/cmd/intro.html

You can also design a complex motion in path design area of Dorna lab. 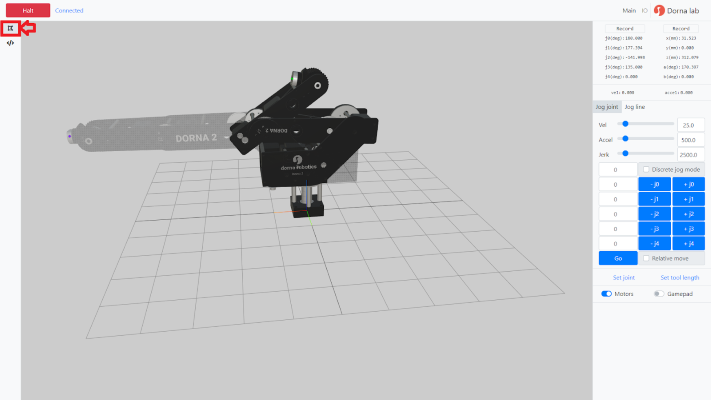 Simulate, play and convert the designed path into motion commands using the tools available in this area. 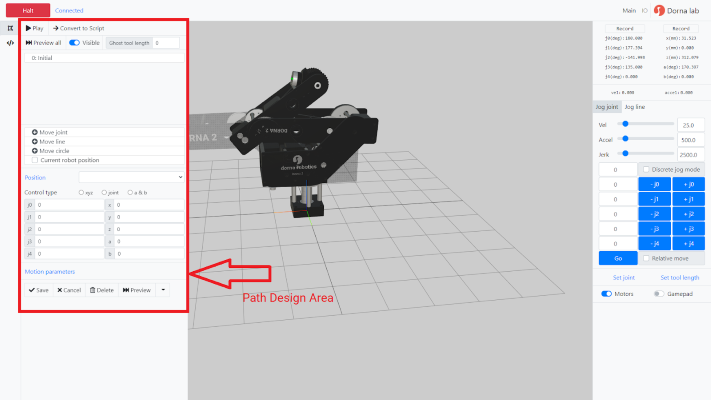 To see the status of I/Os, change their values and control external actuators, using the I/O window of Dorna lab by clicking on the IO button at the top of the screen. 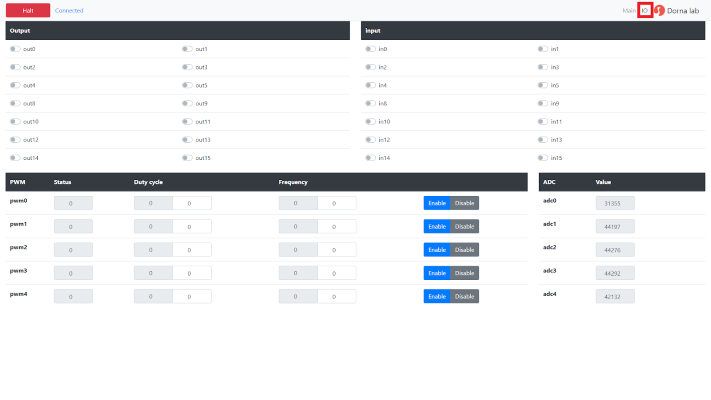